“Hey, it’s Thursday. Isn’t that blogger (with the name I never remember) supposed to have a new post out?”

Here it is Thursday and it’s not that I don’t have something I want to share with all of you (I do and I’ll write about that on Monday) but I don’t have any time today to write a new post.  Instead, I’m out having margaritas and tortas, smashing cascarones (hollowed out eggs filled with confetti) against someone’s head, and yelling, “Viva la!!!” It’s Fiesta time once again in Santa Barbara.  If you don’t know about Fiesta, let me fill you in:  it’s a five-day excuse to party. There’s a parade, LOTS of alcohol (mostly involving tequila and cervezas (beer), but hey, in a pinch anything alcoholic will do) and so many displays of Spanish-style dancing in colorful costumes you’ll think you wandered onto the set of “Zorro.”

Today’s Fiesta, now called “Old Spanish Days,” centering around a Courthouse evening  known as “Las Noches de Ronda,” originally was started by the Poole-Verhelle Group of Dancers in 1922.  Dancing for enjoyment and entertainment eventually evolved into a community party now known as Fiesta.  Here’s a picture of that original group.

My grandfather is supposed to be somewhere in that photo.  But for the life of me, I don’t see him anywhere – maybe he was behind the camera taking the picture.  You can see him (and my grandmother) in this photo below, all dressed up in their Fiesta finest. 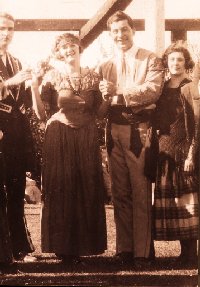 And going back one more generation, here’s my great-grandfather… 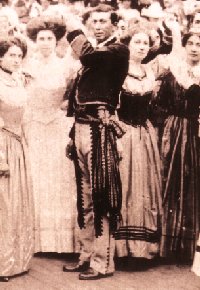 If you’re a certain type of local, however, Fiesta time in Santa Barbara is when you abandon the town to the tourists and take off to Hawaii, or some other exotic location where you can party according to their local traditions. My dad and uncle always took ten days off on the dates when Fiesta would fall during the year. They had their own business – an ironworks/welding shop – and they’d hurry up like hell to finish up their jobs,  sometimes right up to the night before Fiesta Pequena kicked off that year’s Big Party.  How they managed to get all of their work done in time for their getaway was always a miracle, and involved much yelling, swearing, and both brothers threatening each other, “I’m not going on vacation!!”  “NO, I’m not going!” Although their parents generation had started Fiesta, the two brothers hated that time of the year in their hometown.  Maybe this photo had something to do with it: 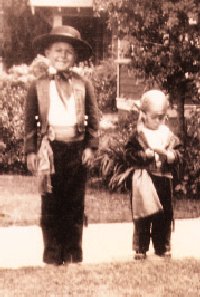 That must have been the one and only time the brothers dressed up in costumes.  Too bad because they were awfully cute hombresitos.

In spite of the dislike the two brothers had for Old Spanish Days craziness, the love for Fiesta still beats strongly in the younger generation. My kids always stop their own lives to return like spawning salmon to their hometown, and the sweet sounds of mariachis and “Viva La!!!” So forgive me if I can’t write a post today.  Sometimes there’s a greater calling than just the need to put thoughts into words.  It’s Old Spanish Days in Santa Barbara!

And I have to get the hell out of this town before the tourists take it over.

Just to get you in the Old Spanish Days mood, here’s a little Californio song that my grandfather used to sing to us…