I was just a kid when dad came home one night and announced that he and my uncle had bought a building.

I was certain we were rich.

And then, he explained that the building – an old two-story house in the center of the city – really didn’t belong to them yet; the bank was the real owner.  We’d have to pay a mortgage every month, 12 months a year, for 30 years, and then it would be ours.

Now I was certain we would be poor.

This just didn’t make sense to my ten-year-old ears. We already lived in a pretty nice house; we didn’t need another one.   Plus, this new one was old and in the middle of the city, with buses and traffic and all the noise and grime that comes with city life, while we lived in the pristine safety of the suburbs. It’s not like it was a newly built house or special in any way.  It didn’t have a backyard we could play in or even a swimming pool we could use on the weekend.  This one was two stories, subdivided, and it was going to have a couple of “tenants,” Dad explained.  One day, he told us proudly, it would be all ours.

We drove downtown on Sunday to take a look at the house – my dad, my uncle, my brother, four cousins and me.  We crammed into the two family cars and drove downtown to take our first look at dad and uncle’s big investment. 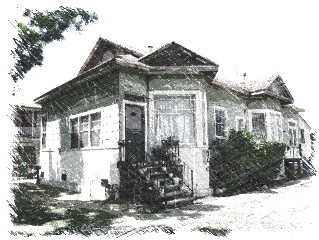 It was the ugliest old house I’d ever seen.

A ramshackle clapboard that had been mended, and fixed-up – you could see 50 years of handiwork from its chipped concrete foundation all the way up to its mismatched and faded shingles.  It was covered with a patchwork-quilt of repairs.

“All it needs is a paint job,” my father told my uncle, who grunted – I guess, in agreement.

We tagged after our two fathers as they walked around the old house, surveying their new land, like Lords of the Manor. A small patch of brown lawn accessorized the peeling clapboard, and the back of the building looked even worse than the front.  But all my father and uncle could see was potential.

I wasn’t as farsighted or as hopeful as they were.

We all mounted the back steps (which were missing a handrail) and entered the old building.  It was dark, musty, and smelled like most ancient things that are neglected and unused. It had been sub-divided into three apartments that were small, cramped, and in desperate need of new flooring and paint.  It was all fixable, my father and uncle told one another. Little by little, they both agreed that they could make this old house rentable.  And what wasn’t rentable, they’d use for storage.

I didn’t have their vision.

There was nothing good about this old house that I could see. Room by room we all walked through it, sizing up every inch. The rooms were barren, the walls unfilled. Empty of furniture, it was hard for me to imagine people ever living there.

Until dad and my uncle decided to check the attic.

Attics are mysterious and exciting when you’re a kid.  They’re dark, and unknown – filled with creepy things like spiders and rats, but a place with promise of surprise and treasure too.  Strictly off-limits unless you’re with an adult – at least that was the rule in our family.  But that day in the old house we had our fathers with us and we felt invincible. There was nowhere too dark or too frightening we couldn’t explore.

Led by my uncle, one by one, each kid followed, with my father protecting our rear flank.  We mounted the pull-down ladder and disappeared into the darkness.  It took a moment for our eyes to adjust, but when they did we saw that the attic was as empty as the rest of the rooms below it.  There was no treasure waiting there to be found.  Nothing but a few ragtag books that lay on the floor, with pages filled with dust and some nibbled by God-knows-what.  My uncle handed them to each of us kids, who eagerly saw merit in every decrepit, ripped up volume, much like we did when we’d find metal slugs on job sites.  But one book in particular caused my uncle to pause.  A simple black cover, ripped at the top, and without a title, made him carry the bound pages closer to the opening of the attic where the light spilled brightly into the darkness.  What he had found was a true treasure, and as he opened it, he graciously revealed its pages to our eager young eyes.

It was a scrapbook.

Not like any scrapbook I had ever seen, it’s black satin-like pages were filled from edge to edge – with postcards.  Bright, colorful pictures filled its pages, along with black and white photographs of long ago, with women in long dresses and men staring blanking into the camera.  Among the oohs and ahs that quickly filled that attic, my uncle slipped a postcard out and turned it over.  There was writing on the back!  He pulled out another and found more writing.  Each card he turned over, there was a message and a date.  “June 14, ’09,” “July 16, 1909.”  “November 1, 1909.”  We had found a time capsule into the past.

I hadn’t discovered writing yet at that tender age of ten.  I was a year away from taking a creative writing class in summer school, and falling in love with making up stories.  Looking back, maybe that day in the attic is what put me on a writer’s path.  All I know is that I couldn’t take my eyes off that scrapbook, or those postcards with all those words from people who had lived so long ago.  Like characters in a book, they seemed to be waiting there, to be discovered, just by me.  Perhaps I stayed longer, looking at those postcards, while the other kids moved on to far corners of the attic, and other explorations. Perhaps because I was the oldest I was trusted with the responsibility. Or maybe I was just the kid standing the nearest to my uncle, and he saw my fascination up close.  Whatever his reason, he handed me the scrapbook, and I took it for my own.

I spent so many days reading those postcards and imagining all those people who had written them:

Young Rollin Curtis who was just a boy when Aunt Libby wrote him a letter in 1901 thanking him for remembering her with a Valentine.

Mrs. Marion Andera, probably a boarder or maybe a mother-in-law living with her daughter. 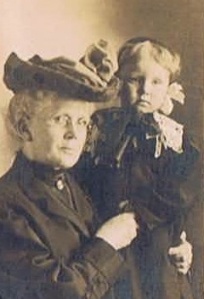 Little Jessie who remains young in all the postcards – with blonde hair, and never a smile. 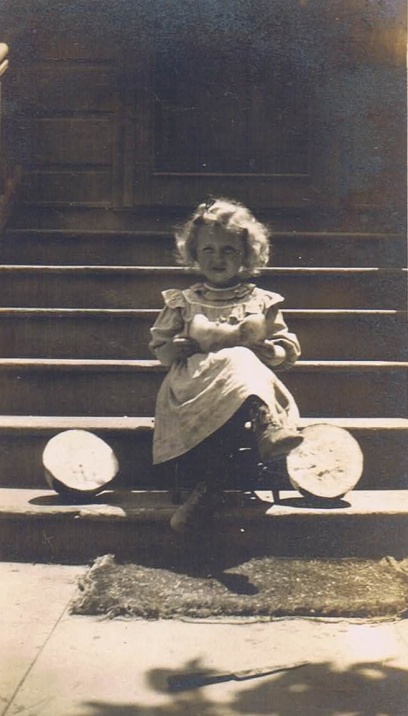 The relatives of the Curtis’ and the Anderas who lived in Kendall, South Dakota, Salt Lake City. Utah, and Waterloo, Iowa.  Mrs. Andera’s friends who sent her postcards of Hermosa Beach, Ocean Park, and a place Rollin called “City of Angels.”

I looked at the pictures and what I didn’t see I made up in my mind – the way they spoke, and laughed, the voices they had, the emotions they felt, the lives they lived.  That scrapbook opened my imagination and made me ready and eager to create on paper what I was learning to do in my mind.

That day we found that scrapbook was years ago – a lifetime really.  My father and my uncle are both gone now. All of us cousins have grown up with the next generation following close behind us.  We have all been touched with change.

Only one thing has remained the same: that ugly old house.

My father and uncle’s investment has been all paid off to the bank.  It belongs to my cousins, my brother and me now.  Through the years it’s had its tenants – only two apartments have been livable.  My brother was even a tenant at one time when he was a young artist and a student. But it’s a different day, a new century, and now even the city doesn’t like our ugly old house.  Too many years, and too many patchwork repairs aren’t enough anymore.  There’s a list of items to be upgraded, too many rules and regulations to be followed, and costing more money than we have, or that’s more than the worth of this ramshackle clapboard old-timer.

We have to tear it down.

But that’s not as easy as you would guess.  The city wants a historical review done, and at $1500 we have to do it.  A lovely historian lady came and walked through the house – very much like we all did many years ago.  She also oohed and ahhed, but when it was time to write her report, she followed the rules and regulations to the letter, and deemed the building, “not historical.”

But the city needed an official report and so they received one – fourteen pages long. We found out some interesting facts about that old ugly house.  It was probably built in 1895 in the middle of vineyards.  And it was a Queen Anne.  It probably looked like this:

We also learned about the people who had lived in that old house.  1927 was the year it was subdivided into four apartments. The occupants were working class people, with occupations as “watchman, barber, motorcycle police, clerk, bookkeeper, SCE lineman, fire dispatcher, typist, storekeeper, upholsterer, salesman, stone cutter, and auto operator.”

I liked learning about the people who had lived in that old house. I didn’t have a problem with most of the report, but what gave me pause was something the historian had written at the end of the report – that the house had no historical value because there was “no integrity of association.” And as the historian explained further, “None of the people living in the house were important to the community.”

None of those professions are important to a community?

Reading that historian’s report made me remember those postcards.  I hadn’t looked at them for many years, but I searched through my closets and bookcases until I found them.  I had transferred most of them into a new binder so it was easier to slip them out and read their messages.

I’ve spent the last few days reading through these old postcards and studying the faces of the people, looking at the places they went, where they lived, and who they knew.  They are as real to me as when I first discovered them – when the old house introduced me to them in its attic – these long ago forgotten people who in history will never be considered important.

I beg to differ.

(Here’s a little film I made about the old house and those postcards from so many years ago. The song, “This Old House” is performed by The Rice Brothers on the Bluegrass Class of 1990 album.)

32 thoughts on “Goodbye, Old House – It Was Nice Knowing You”

Leave a Reply to Bette A. Stevens Cancel reply