I was born a Catholic but last night I did what I’ve been doing for many years – I made latkes.  Our family is interfaith – my husband is Jewish, and I guess I’ve been an honorary Jew ever since our first Hanukkah together when I tried to buy a menorah for my husband-to-be.

When I was a kid growing up in my Southern California community, Jews (and Jewish items like a menorah) were not so easily found.  I didn’t have a clue where to buy a menorah so I went to the most cosmopolitan place I could think of – a department store.

“Do you carry menorahs?” I asked a clerk on the ground floor.

She looked at me like I was speaking in tongues.

I tried to explain, but I really didn’t have a clue myself.

She suggested I try bedding.

A department store was obviously not the best place to go looking for a menorah, but back then, who knew?  Luckily, I was rescued by a little old lady who got my attention with a very loud, “Psssst!”  I looked over her way and she beckoned me like one of those ticket scalpers at a sporting event.

“You want a menorah?” she asked in a voice barely above a whisper.

“Yes,” I answered.  “Do you know what department?”

“You won’t find it anywhere in this mall, or any mall in this whole town.  You’ve got to call the Temple!”

The old lady sighed deeply and reached into her purse for paper and a pen.

I didn’t understand: Why was it so difficult to find something Jewish?  And then, I started thinking back to all my Jewish friends I had growing up: I had one.  I think.  I went through junior and senior high with my friend, Carol, but she never talked about being Jewish and nobody ever asked her, so who knew?! There weren’t a lot of Jews in our town, or at least we didn’t know them. My only understanding of what it meant to be Jewish was when my mother explained to me when I was a little girl that “Jewish people get eight presents at Christmas.”

Clearly, I had a lot of learning to do.

And I started the moment I bought that menorah.

Unfortunately, I didn’t buy it at the Temple – It was too far for me to drive (Yes, this was during the beginnings of my agoraphobia) and I made the mistake of going into Susie’s Hallmark Gifts and Stationary Store across the street from my old high school.  Hallmark is known for celebrating the holidays – I was sure they’d have a menorah.

Until I gave the wrapped gift to my husband-to-be.

His smile froze as he peeled away the wrapping.

I detected a problem.

“It’s a menorah for Hanukkah!” I said proudly.

“Yes, it is! It definitely is! It’s from a Hallmark Store!

“But it holds candles…”

This was the beginning of my education in Jewish culture.

To this day I have no idea what that item was that I bought for my husband.  But he was so touched that I had tried to find him a Hanukkah menorah that he used it anyway.  We set up two small candleholders next to the six on the menorah-wannabee and just-like-that we created our own Hanukkah menorah. Once our son was born (and catalogue ordering became a possibility) we bought a real menorah for Hanukkah.  And I learned about latkes, dreidels, and Hanukkah gelt.  More importantly, I learned what Hanukkah was all about.

It’s about a miracle.

And that’s something any Catholic or Christian can understand.

The Hanukkah Handbook If You’re Not Jewish

Hanukkah: In 168 B.C.E. the Jewish Temple was seized by Syrian-Greek soldiers and their emperor made the observance of Judaism an offense punishable by death.

Jewish resistance began and these rebels became known as the Maccabees.  Eventually, they succeeded in retaking their land from the Greeks and once the Maccabees had regained control they returned to their Temple in Jerusalem.  The Jewish troops were determined to purify the Temple by burning ritual oil in the Temple’s menorah for eight days. But to their dismay, they discovered that there was only one day’s worth of oil left in the Temple. They lit the menorah anyway and to their surprise the small amount of oil lasted the full eight days. This is the miracle of the Hanukkah oil that is celebrated every year when Jews light a special menorah known as a hanukkiyah for eight days. One candle is lit on the first night of Hanukkah, two on the second, and so on, until eight candles are lit. 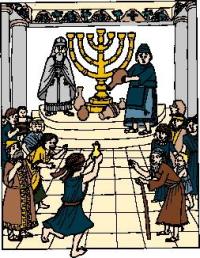 Latkes:  Potato pancakes that are fried in oil – symbolizing the oil used by the Macabees.

Dreidel:  A four-sided spinning top played with during Hanukkah.

Gelt: refers to money as well as chocolate coins given to Jewish children on the festival of Hanukkah. 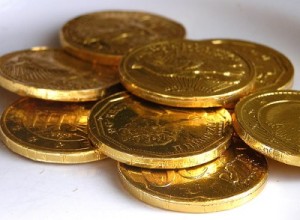