Your responses to last week’s blog post (Should I Say Yes To The Dress?) were so enthusiastic and helpful I wanted to let you know how the search for my special Mother of the Bride dress is going.

First, to recap:  Here is the dress I’m looking for: 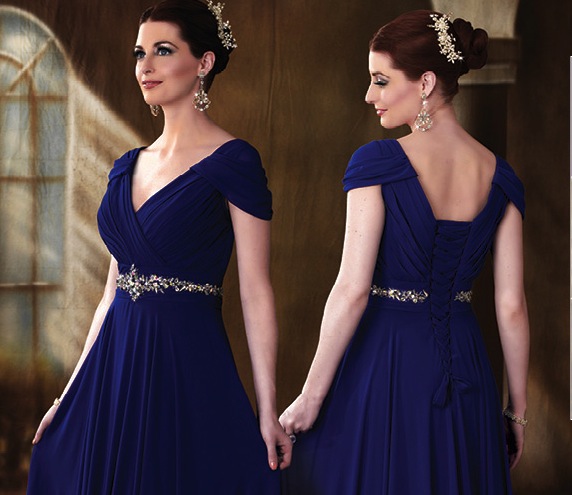 All of you who commented last week agreed that the dress was beautiful and it would make a wonderful Mother of the Bride dress.  But the problem was that the closest store that “might” have this dress was listed as being in Yucaipa.  Besides not knowing where the hell Yucaipa was, that word “might” was making me mighty nervous.  Mary’s Bridal (the designer) was not willing to commit one way or the other if the dress was actually in Yucaipa or not.  Only that it had been delivered there in the last year.

Yeah. Not much help.

Encouraged by those of you who suggested a road trip, I reached for my phone and called the Yucaipa store that Mary’s Bridals had listed on its website as a possible location for this Dress Style #S13-M2172.  With today’s gas prices, I wasn’t about to take a second mortgage out on my house to  finance a Yucaipa road trip if the dress wasn’t there.

So I decided to call the store in Yucaipa.

On Friday no one answered the phone. On Saturday when I called I got a Sprint mailbox and a strange beep.  I tried again on Monday and still got the answering machine with no one’s name attached to it, and no name of the store.  On Tuesday night, I decided to google the store just to make sure it actually existed.  And voila, I found it!

Yucaipa’s “European Famous Tailor” was listed online – right there in Google. There was an address listed (a good sign!) and I could see by the listing that it actually existed.  Now, we all know you can’t judge a store just by its name,  so I decided to use the store’s address and Google Street View just to get a look at European Famous Tailor’s store front.  Here’s what Google showed me: 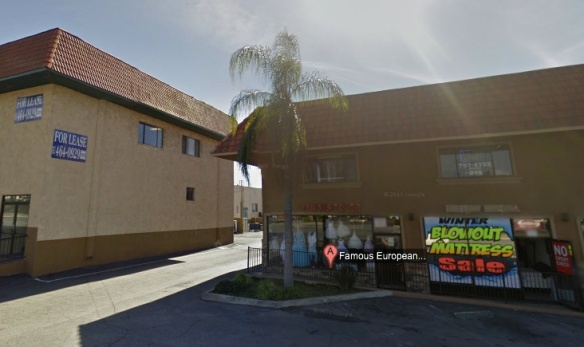 Call me silly, but when people ask me where I got my Mother Of The Bride dress, I don’t want to say a strip mall in Yucaipa.  “Around the corner from Rob’s Gun shop and Terry’s Bail Bonds.”

I took a day to think about it.  There were four other stores listed at Mary’s Bridal website that also “might” have the dress.  The next closest was in Tucson.  Okay, why not?  I called.  They answered.  They’d never heard of Dress Style #S13-M2172.

“But we can order it!” the cheerful saleslady told me.

Goodbye, $458 (that’s not including alterations).

Tucson was a helluva lot further than Yucaipa, and I still wouldn’t get a chance to see the dress before buying it.  I wouldn’t even be able to try it on.  But I’m the kind of person who gets an idea in my head and I don’t give up easily.  As a matter of fact, I like challenges so much, I’ve been known to persevere in spite of the fact it’s a stupid idea.  And this is where all of your comments helped me: I could just hear in my imagination Adrienne, catnipoflife, June Collins, Lynne, jubileewriter,  and so many others of you who commented telling me to take a deep breath, and not commit to buying a dress without trying it on, or at least seeing it up close.  I could hear those words of wisdom from JeriWB, quirkybooks, Raani, Wayne, Yaseen, Jen, and the rest of you.  It made me look before leaping: I thanked the saleslady, hung up, and called Yucaipa again.  This time I dialed a second number listed on the Google website.  And someone finally answered the phone.

“Do you speak English?”

“Un poquito,” the woman admitted, sounding not the most confident.

“I’m looking for a dress,” I told her, speaking as loudly as possible, as though volume alone would help her understand English.  Rambling on, nervously (even I would have trouble understanding me) I told her I was looking for a Mother of the Bride dress, the name of the designer, and I gave her the style number.

“Call back, ten minutes” she told me, with great certainty.

You know what I’m thinking?  I’m willing to bet that Yucaipa’s European Famous Tailor has never even seen Mary’s #S13-2172 dress.  Or if they have seen it, maybe it sold right away.  Just to make sure, I called one more dress store – this time in Glendale, a store that lists Mary’s Bridal as one of its designers.

“We haven’t had that dress for months,” the woman with a thick accent explained to me.  “It sold right away!” she said.  And rubbing the wound even harder, “It’s such a beautiful dress!  One of the most beautiful dresses I’ve ever seen.”

There are two more stores on Mary’s Bridal list that I could call: Chrsitina’s Bridal in Caspar, Wyoming or Debi’s Bridal Shop in San Antonio, Texas.

Frankly, I think it’s time to look for another dress.

What do you all think?

(Read the next installment of the hunt for a Mother of the Bride dress:  Sometimes Yes To The Dress Is No)

35 thoughts on “Saying Yes To The Dress (UPDATE)”