“We come from the dirt, we go back to the dirt.”

That was the phrase my father was fond of saying.  He used it often, and he did it to remind us of who we were, and what our family was all about.  No pretensions.  No highfaluting ways.  We were humble, hard-working people with common wants and needs, and no lofty sense of importance.  We were the peasants working the land.  As a matter of fact, this was my father’s favorite family photo and one that was the basis of his dust-to-dust philosophy: 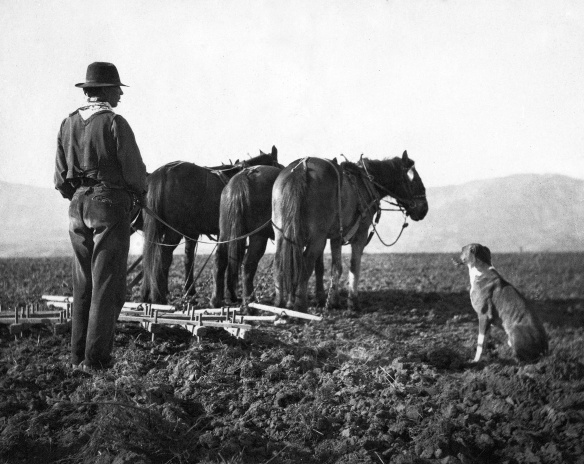 The man behind the team of horses was my father’s grandfather, the son of an Italian immigrant, and a man who worked the land to feed his family.  My father always liked to point out that the land being toiled wasn’t ours; it was leased.  He also liked to point out how skinny the dog was, and that it was a sign of how poor we were.

What my dad forgot to mention was the grocery and grain store his grandfather co-owned with his cousin (supplied by those crops on that leased land) or the property his great-grandmother owned, acres of land high above Santa Barbara, on the Mesa.  These facts were missing from his dust-to-dust scenario. I learned the truth, however, in the yellowed papers of our family’s history that my uncle had handed off to me.

As I read those papers, I learned more about my father’s great-grandmother Rosa Garcia.

“When Rosa got married she had all this land,” that distant cousin had reminisced many years ago, and I was now finally reading about it.  “Every time they could get a dollar and a quarter together they would buy another acre. They had these cows and chickens and they used to plant their own vegetables, and Rosa used to go to town; she’d make cheese and butter, and bring eggs to trade for coffee, sugar, and flour. They raised their own pigs for lard and they raised their own beef.  And when they could spare a little, in between they would buy another acre.”

But she was a Garcia, and my dad had never mentioned the Garcias at all, or talked about the land his great-grandmother had worked so hard to own.  That family name always was missing in our conversation until Pam, the cousin-I-didn’t-even-know-I-had, friended me on Facebook.  Now, I was faced with an entire list of Garcia names that Pam had sent me, and here was this new-found cousin telling me I was related to all of them.

And what did I do with that list of Garcia names Pam sent me?

I ignored it. Forgot about it.  Put it out of my  mind completely.

Voices From The Past

Why do you want to go digging in the past? I could hear my father’s voice ringing out loudly inside my head.  These were people I never knew, names I’d never even heard of before.  Besides, I didn’t need to be reminded that we “came from the dirt, we go back to the dirt.”  I didn’t want to face more people behind ploughs with starving dogs, working dawn to dust.  Even Rosa had to scrimp and save, raising and growing their own food, to buy another acre for her family.  She had buried two husbands, but the one remaining constant in her life was the land she had worked so hard to own.  We were farmers, carpenters, and iron workers; okay, I got it.  Just plain working folks. The history books are never filled with our kind of people.  Those Garcia names would only mean something to the people who inhabited their world, their time, and that time was over.  The most I could hope for would be names on a headstone; there wouldn’t even be any photos of these people, or any real record of who they were, or how they had lived.  They were simply anonymous names who lived anonymous lives.

But I was wrong.

It took me almost a year before I went back to my private messages on Facebook and took a closer look at those Garcia names that came before Rosa.  And when I did what I learned surprised me and made me want to learn even more.

There were six names on the Garcia list that Pam had sent me.  The last name was Rosa’s and since I was 100% sure we were “parientes” (kin), I looked at the other five names on the list.  The first two had lived in Spain – in Alpera, Albacete, Castilla-La Mancha, Spain. Quite a mouthful. Google was kind enough to show me where in Spain that mouthful is located (150 km. from Valencia and the coast overlooking the Mediterranean).  But the other names – Hilarion, Carlos Maria, and Felipe Santiago – only connected us to a generation, and not to where they lived.  I wrote Pam and asked her, and she wrote back immediately.

California, she told me.

I didn’t have all of their birth dates, or the dates they died; I didn’t know who they married, or how many children they had, but each one of the three men had lived here in California. Hilarion, who was Rosa’s father, was baptized in Santa Barbara; Carlos Maria, Rosa’s grandfather, was baptized at the Mission in Carmel and died at the Mission San Gabirel, and Felipe Santiago Garcia, Rosa’s great-grandfather, was buried at San Carlos Mission in Monterey.  They were three men with roots here in California.  But who were they, and how would I ever learn anything about them?

When in doubt, turn to Google.

I wasn’t expecting to find any of their names listed there on the Internet, but I started with the first name, Felipe Santiago Garcia, since he seemed to be the first of the Garcias to be connected to California.  I typed out his name and a rush of data suddenly appeared, 3 million and 30 results, to be precise.

I didn’t know where to start.

I clicked from one site to the next, skipping through the entries like a kid in a candy store.  I got lost momentarily by another man named Felipe Garcia, but who turned out to be a Romero, and not my grandfather five times removed. But I corrected that misstep and found my way back to Felipe Santiago, our Felipe, as I read and re-read a night long series of websites, genealogical listings, and yes, even California history.   I compared dates and locations, and the information pointed to one name, one man called Felipe Santiago Garcia, who had a past and a history, and a rich connection to California. Felipe was a soldier – un soldado de cuera – a special soldier of Spain that was sent from Nueva España (Mexico) to Alta California in 1774.

(NEXT WEEK: Following Felipe – the beginnings of an untold story.)

20 thoughts on “Searching for the Garcias”