You don’t ever expect to find a relative’s name in a history book.

At least I didn’t.

But there was the name, in black & white text on the page in front of me:  “Felipe Santiago Garcia.” I stared at it, and gave myself a thousand reasons to doubt it.  Then, I looked closer and confirmed the facts.  The dates matched:  Felipe was born in 1748 in Sinaloa, Mexico, and married in 1773 to Maria Petra Alcantara Lugo.  Both husband and wife arrived in San Diego, in 1774.  They had a son named Carlos Maria who went on to have a son named Hilarion.  All three names were on the Garcia list I was searching for, and there they all were in the history book in front of me.

The three volumes of Spanish-Mexican Families of Early California: 1769 – 1850 ( by Marie Northrop) are considered the Bible when it comes to historical research on the beginnings of California. The books are out of print (except for Volume 3) and if you are persistent enough to look for them, and lucky enough to find them, two volumes will easily set you back $500.

My cousin Eileen was smart enough to track down the first two volumes in 1997 for a little over $40 to give to her father (my uncle) as a Christmas gift.  Now,  sixteen years later, with my uncle’s passing, my aunt had handed me both volumes along with my uncle’s files of genealogical research.  Having found Felipe’s name on the internet, I had called her and asked if Uncle Danny had ever written down any information about the family.

The file my aunt shared with me was brimming over with notes, scribblings in my uncle’s handwriting, and yes, there was Felipe on a roughly sketched out family tree, along with Carlos, Hilarion, and Rosa.  But the Marie Northrop books she also loaned me gave a legitimacy to those names.  The Garcias were true Californios, and historians had acknowledged that.

Felipe had been a soldado de cuera – a special type of Spanish soldier in California named after the “cuera” or the thick “leather vest” they wore for protection in combat from arrows, or spears. 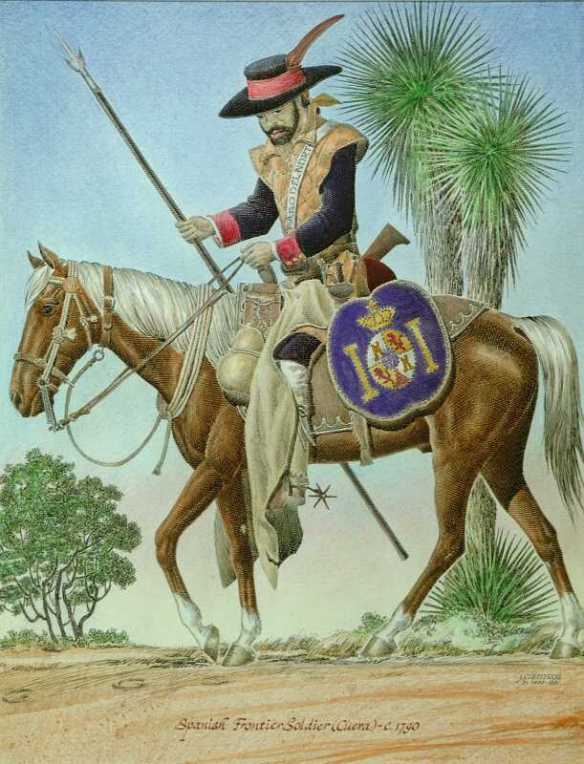 These soldiers were sent to Alta California as early as 1769 to escort the Franciscans as they set up their missions, and the soldiers built the presidios.  In 1774, Father Serra and the Crown decided that no longer would soldados de cuera travel to the unsettled region as single men.  Families were to be sent with them, to help settle the land, and to ease the loneliness of the soldiers in Spain’s new territory.

The first land expedition that brought both soldiers and their families to California was led by Captain Rivera in 1774.  Felipe and his new wife were among the 51 people on that expedition. Petra was pregnant at the time, and on November 10th she went into labor while the expedition was on its way to Monterey.  A son, Juan Joseph, was born outside Oso Flaco and was baptized immediately when they reached the San Luis Obispo Mission because the baby wasn’t expected to live.  He lived, however, and his birth was recorded as the first European child to be born in California.  Petra and Felipe went on to have eighteen more children – Rosa Garcia’s grandfather (our family connection), was their second son, Carlos.

The soldados de cuera were moved from mission to mission.  Felipe, along with his family, went from the Presidio of Monterey to Mission San Antonio de Padua, San Gabriel Mission, Pueblo Los Angeles, and the Santa Barbara Presidio, until his retirement took him back to Monterey.  Most of the early soldados were given land as gratitude for their service to Spain, and I wonder if Felipe received land, and if so, what happened to it?  Was this the beginning of our family’s connection to owning land?

Seven of Petra and Felipe’s sons became soldiers; the eighth son resisted and was smuggled out of the country on a ship that was bound for Chile.  He chose exile from his family rather than hanging for refusing mandatory military service.  His brother, Inocente, (who would write about the experience in Garcia Hechos and Other Garcia Papers) helped his brother escape and the family never saw him again.

I’m hooked. And I want to know more.

In July, I ask my husband if he’d like to take a road trip up to Monterey to follow in some of the footsteps of Felipe and Petra.  Maybe see a mission or two where he was stationed, and some of those nineteen children were born.

“I’d like to visit their graves,” I tell him, knowing that both Felipe and Petra had died in Monterey.

“Let’s go!” he tells me, sensing an adventure and a much-needed summer vacation. 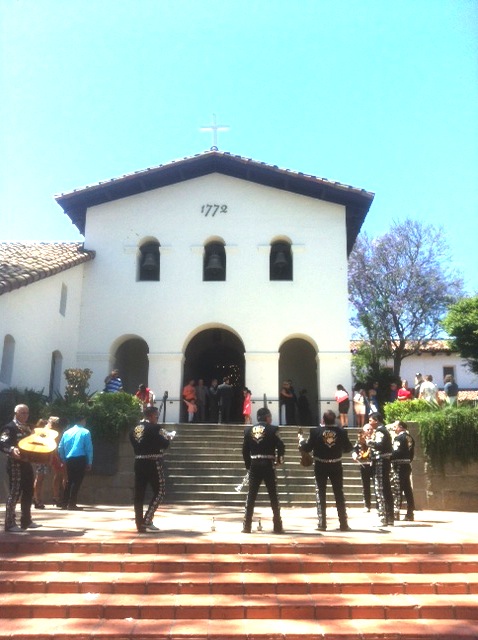 (There was a wedding going on and the Mariachi’s  helped to set the mood.)

Next, we travelled by car to another mission where Felipe was once stationed, driving across land that would have taken him a day’s ride to reach the mission.  We arrive there in less than an hour and a half.

Mission San Antonio de Padua is one I’ve never heard of before.  An hour outside of Paso Robles, and set away from any major cities, it’s in a rural setting much like Felipe and Petra would have travelled through to get there.  It’s easy to imagine a column of women, soldiers, friars, and a few small children, all on the back of horses or mules, traveling in the San Antonio valley’s oppressive heat.  When we were at the mission, the temperature reading in our car at one time read 118 degrees.

We’re expecting to see no one at the mission – it’s hidden away under the careful watch of the Santa Lucia mountains, surrounded by thousands of oak trees, and in the middle of military land – Fort Hunter Liggett.  But when our car pulls up we see hundreds of other cars parked around the mission, and it turns out we have arrived on Founder’s Day. It’s July 14th, exactly 242 years after Father Serra erected a cross and named the mission, San Antonio de Padua.

If ever I felt like Felipe was walking at my side, it was on that day as I moved across the mission grounds, poking my head into every nook and cranny I could find.  There was the church where Petra and Felipe had gone to Mass, the barracks where the soldiers were housed, and even the baptismal font where three of Petra and Felipe’s children had been baptized.

I could feel the Garcia family surrounding me.

And I wondered what would happen when I finally got to Monterey?

(NEXT WEEK:  The final post in the CALIFORNIO series: Lost & Found in Monterey)